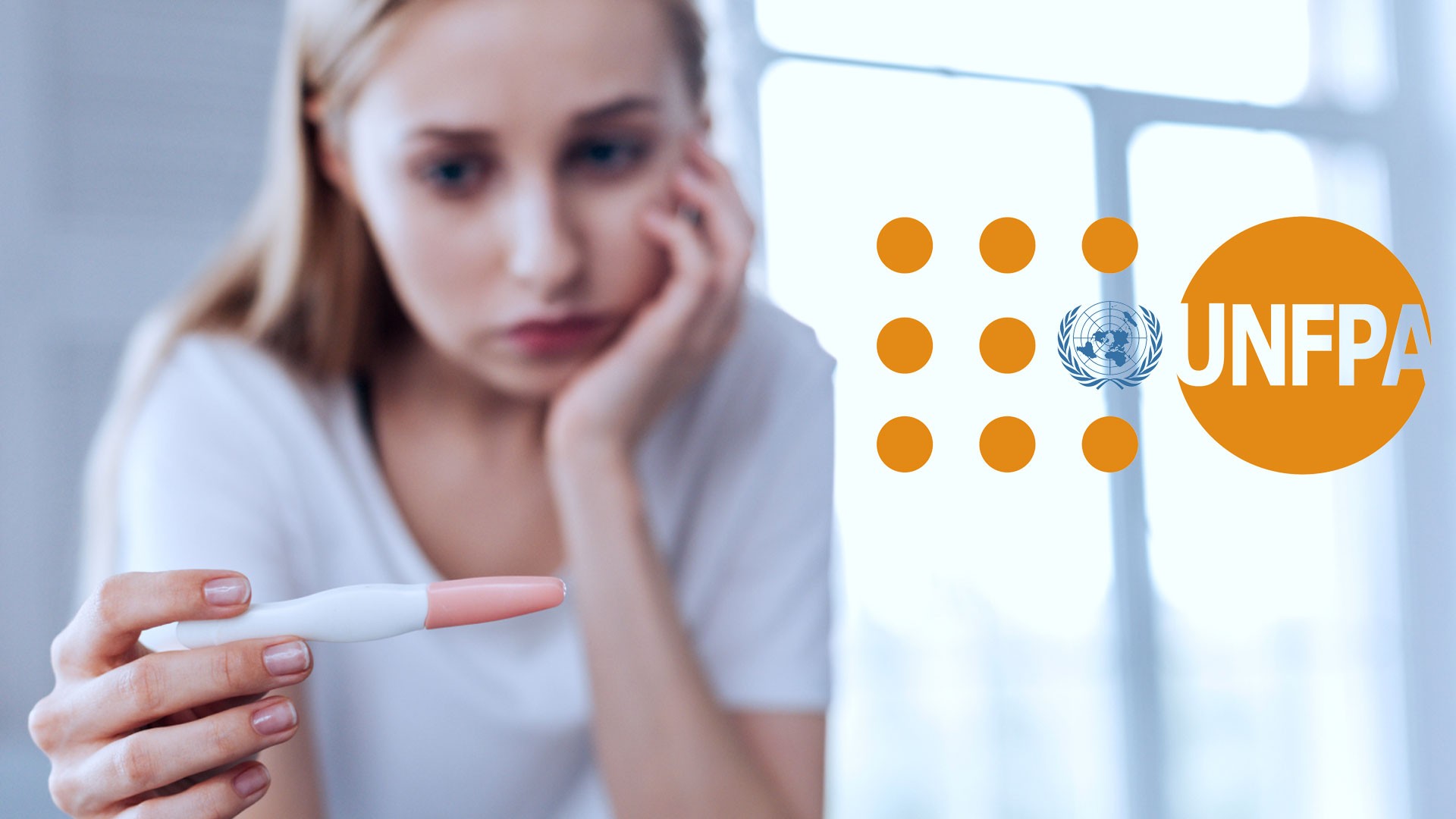 The  UNFPA (United Nations Population Fund) report “Seeing the Unseen: The case for action in the neglected crisis of unintended pregnancy,” purports to:

In this analysis, we discuss the scientific reliability, limitations, and drawbacks of the WHO’s approach for evaluating this topic.

This latest report states that every year, almost half of all pregnancies worldwide are unintended: “this is the percentage of pregnancies that do not result from a deliberate choice on the part of women and girls in the world”.

The UNFPA report is based on another study published by the same authors in 2022 in the British Medical Journal (BMJ). It gives a detailed analysis of 150 countries and gives estimates on the incidence of unwanted pregnancies and abortions [2]. Upon close examination, it is noteworthy that the uncertainty intervals can vary quite significantly between different countries. Even when focusing on European and North American countries, we can observe particularly wide ranges in the data. In France, for example, the annual rate of unintended pregnancies per 1000 women is estimated to be between 26 – 34 whereas in Romania it is between 31 – 70 and in Russia between 48 – 90 (with an 80% uncertainty interval).

Moreover, the divergences are much greater in other parts of the world. 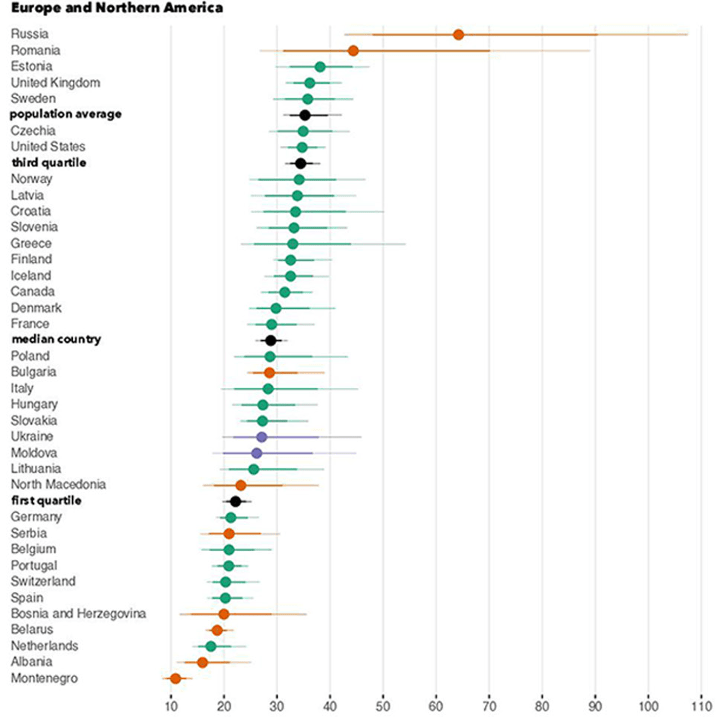 In addition to the question of how these estimates are calculated, some countries are not even included in the BMJ study [2] nor in the UNFPA report. Subsequently, this means data is lacking for all the North African countries (Algeria, Tunisia, Morocco, Libya, Egypt …)  and the Arabian Peninsula (Saudi Arabia, Qatar, Yemen…). Nonetheless, in these regions referred to as Western Asia and North Africa, the authors estimated the rate of unintended pregnancies [1] to be between 67 and 114/1000 which means a difference of 47. This region is thereby attributed to having the largest worldwide difference: compared to 10 in sub-Saharan Africa, 11 in Central and Southern Asia, 25 in Eastern and Southeastern Asia, 18 in Latin America, 6 in Europe and North America, 13 in Australia and New Zealand. Finally, the UNFPA report does not provide estimates for 55 out of the total of 203 countries and territories. Consequently, given the lack of reliable data, the claim asserting that half of the world’s pregnancies are unintended is difficult to consider as being factual.

Bias n°1: The limitations of the classification used

According to the report, “Most current estimates of the incidence of unintended pregnancies are derived from questions used in population-based surveys, such as Demographic and Health Surveys (DHS) in low-income countries. The DHS asks women a single question about each pregnancy that occurred, up to five years in the past. It is usually a version of: “At the time you became pregnant, did you want to become pregnant then, did you want to wait until later, or did you not want to have any (more) children at all?  “Women who respond that they did not want to become pregnant or that they wanted to wait are automatically classified as unintended pregnancies.”

However, unintended pregnancies are composed of two very different situations:

In the report, no distinction is made between these two types of pregnancy.

Nonetheless the report quotes a distinction made between these two categories in the 2014 study by Moreau et al [3]: “in a large survey conducted in France, respondents were more likely to say a pregnancy was “unplanned” than they were to report it was “unwanted”.

Unfortunately, this distinction for French data is not available for country by country throughout the world. This information could reveal very significant differences from one country to another. As it stands, the UNFPA’s current approach for evaluating the situation avoids a fine analysis of the situation of women and prevents adequate recommendations.

Another important bias stems from the ambivalence surrounding pregnancy which can make it difficult to clearly elucidate a woman’s intentions. The report states that “ Researchers have long noted, and struggled to precisely capture, how women’s attitudes toward getting pregnant can fall on a spectrum and is difficult to understand in all its complexity (Hall et al., 2017, Aiken et al., 2016). Thus, many women feel a certain ambivalence at the prospect of starting or expanding a family. Some want to have a baby, but have doubts about their life circumstances, partner or future. A woman’s desire for pregnancy may ebb and flow before, and during, a pregnancy. Moreover, the very notion of intentionality is often problematic (…).”

The authors admit that these situations are difficult to analyze. “This uncertainty has an impact on the data. Many metrics assume that women make conscious and binary decisions about whether or not they want to have a child. A dichotomous measure of pregnancy intentions may not fully capture individuals’ feelings about their pregnancies.” Even so, ambivalence is not considered when conducting surveys, and respondents are rarely offered the choice of admitting: “I am ambivalent about my pregnancy”. The more elaborate questionnaire used in some countries, the London Measure of Unplanned Pregnancy does contain many questions about ambivalence, but only prior to pregnancy. It uses the following expressions: “just before I became pregnant, I’m constantly changing my mind” or “I had mixed feelings about having a child”. However, no study has been carried out to better reflect women’s mixed feelings during pregnancy.

Finally, the data from surveys regarding ambivalence prior to pregnancy from the Lancet article [1] and the British Medical Journal [2] are recategorized from 3 categories of “planned”, “unplanned”, “ambivalent” into 2 categories of “unwanted” and “planned”.

It is difficult to measure intentionality without bearing in mind the role ambivalence plays in the complex decision-making process.

Moreover, in its recommendations, the report itself insists that new studies are needed and “will have to better expose the differences between “unintended” but “wanted” pregnancies, those which arouse ambivalent feelings, and those which are undesired, in order to fully understand the factors behind these pregnancies. »

Thus, there are 2 biases on the relevance of estimates for unintended pregnancies:

– the broad definition for the concept of unintended pregnancies,

– and the lack of a survey on women’s ambivalence before and especially during pregnancy, as well as failing to take this data into consideration when it is measured.

The UNFPA report states that “Rates of unintended pregnancies tend to be lower in countries with liberal abortion laws (i.e., where abortion is allowed for socio-economic reasons or upon request) compared to countries with more restrictive legislation.”

In spite of this assertion, the authors add: “Although this correlation is indisputable, no causal link could be established. Indeed, having favorable abortion laws does not seem to have an effect on the incidence of unintended pregnancies.”

Total rate of unintended pregnancies in countries where abortion is restricted

The UNFPA report recommends that modern contraception must be made more widely available to reduce the number of unintended pregnancies. Remarkably, and without providing a reference, the authors estimate that 257 million women who do not wish to become pregnant are not using safe and modern contraceptives such as condoms, pills or IUDs.

Nevertheless, the rate of unintended pregnancies is weakly correlated with the prevalence of contraceptive use. Scatter plots graphing the relationship between two quantitative values illustrate this poor correlation, concomitant with its’ very low correlation coefficient of R²=0.13: 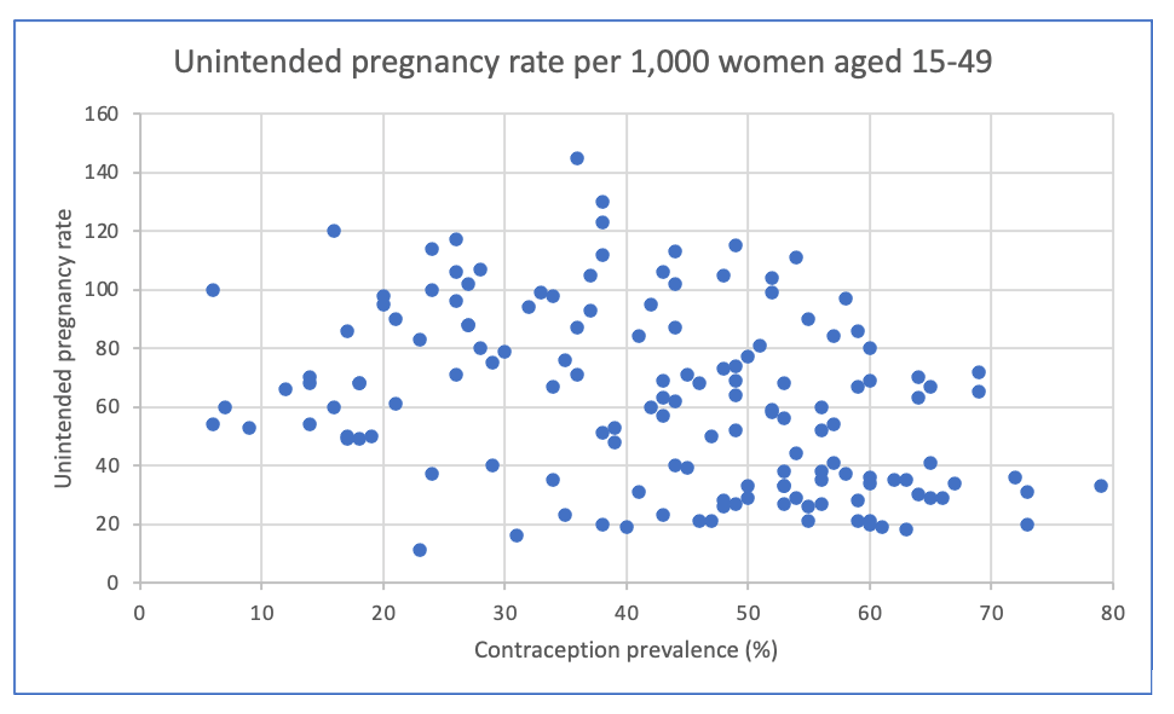 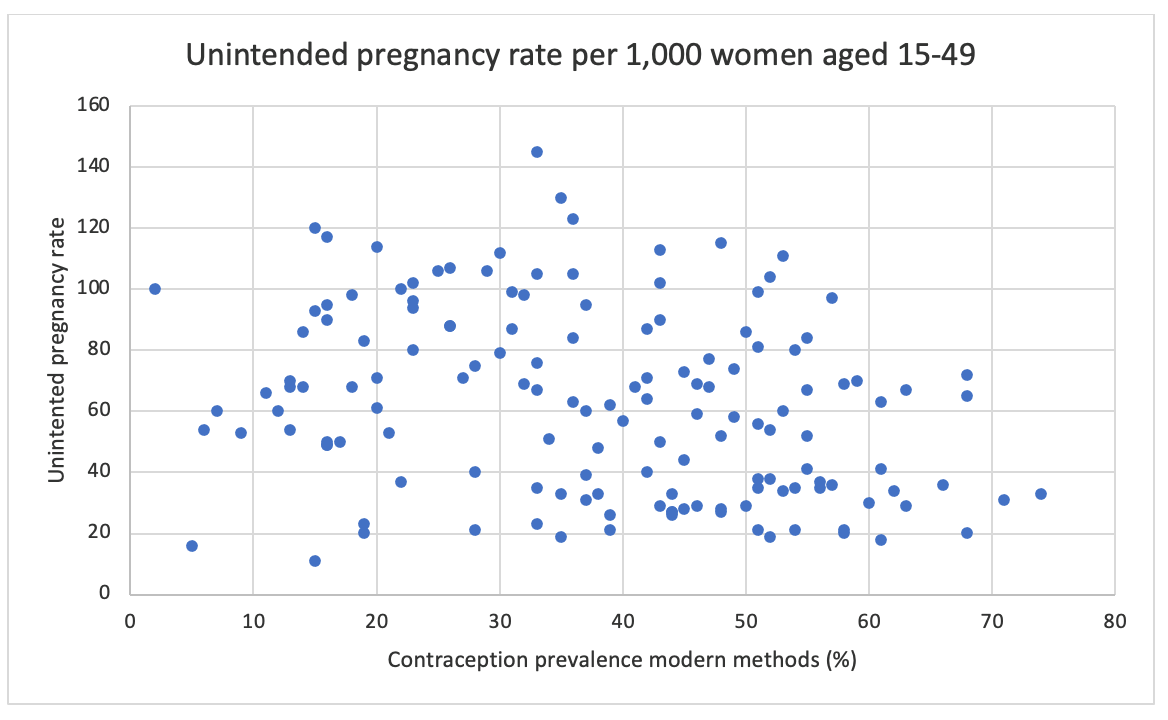 Based on the statistical low correlation between these variables, the multiple and repeated UNFPA recommendations for further extending contraceptive use to reduce unintended pregnancies appear to be unsubstantiated.

Finally, basing their claim on the reference article [6], the report asserts there is an urgent need for access to modern contraception, since in 47 developing countries, 41% of sexually active women do not use any method of contraception. Upon closer analysis of the publication mentioned, it is specifically stipulated that the two main reasons for not using modern contraception in these countries are: “the health risk” and “the low frequency of sexual intercourse” far ahead of the “lack of access”.

As a conclusion, extending the availability of modern contraceptives cannot be the unique solution for reducing unintended pregnancies.