1.     What is the exact meaning of deep and continuous sedation?

The term deep and continuous sedation maintained until death, first appeared in law dated 2nd February 2016, which established new rights for the sick and people at their end-of-life. The law is intended to control situations in which this procedure is liable to be used.

Regarding sedation, what exactly does it mean?

As a general rule, sedation consists in administering sedative products to patients (which diminish vigilance) in order to counter a situation considered unbearable for the patient, in spite of properly conducted specific treatments.

Sedation may be transient or intermittent. It must be adapted to the intended purpose, i.e. proportional and reversible. Degrees of sedation are available which enable the doses of products to be adapted to the desired result.

Deep and continuous sedation maintained until death is a procedure introduced by the Claeys-Leonetti law. It consists in the administration of sedative products (in most cases Midazolam) which are supplemented with neuroleptics (Chlorpromazine) in the event of agitation. Opoids may be added in order to relieve pain or respiratory difficulties. As its name suggests, the administration is maintained until death, which may occur in a few hours or days.

2.     What are the conditions for its application ?

The intention is to relieve chronic suffering in patients with a short-term critical life-threatening condition.

What is meant by chronic suffering?

Suffering is considered chronic if all available and suitable therapeutic and assistance means have been offered and/or provided:

The patient alone is able to appreciate the unbearable nature of his/her suffering, of the undesirable side-effects or of the time-delay for the treatment to take effect.

In the event that the patient is unable to express his/her wishes, the public health code also provides for deep and continuous sedation maintained until death. Whenever it is decided to discontinue treatments (dialysis, artificial ventilation etc.), in order to avoid unreasonable life-support obstinacy, it is conducted following a medical decision in the context of a collegial procedure involving the advice of the next of kin or the person of confidence, if one has been designated.

What is meant by short-term life-threatening condition?

The notion of short-term is characterized when death is imminent, expected within the hours or a few days to come. The medical decision is based on the medical case and a collegial reflection.

If the life-threatening condition is not short-term critical, then the sedation administered must be transient, intermittent, proportional and reversible.

The prescription of deep and continuous sedation maintained until death is not considered lightly, it stems from a request by a terminally sick patient with a short-term critical life-threatening condition, with a life expectancy of a few hours or days. It necessitates a collegial procedure involving a team of multiple professional specialists to evaluate the pertinence and the method of application. Its sole intention is to relieve the suffering considered unbearable by a terminally sick end-of-life patient, not to end the patient’s life. The date and time of death are not pre-determined, and in any case are expected to occur within the coming hours or days.

3.     Who can say that there is no suffering under those conditions with no food or hydration ?

The depth of sedation can be assessed by evaluation scales such as for example the Richmond (RASS) scale: RASS is an instrument designed for evaluating the level of vigilance and behaviour in critically ill patients. 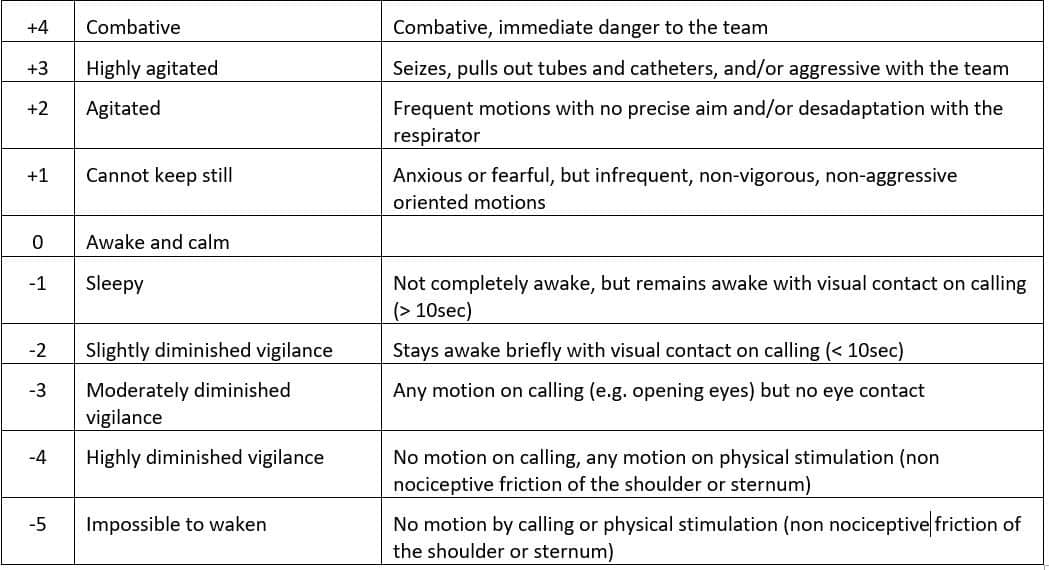 Stage -4 / -5 is achieved in a few hours. The level of sedation reached makes it possible to consider relief of pain and suffering, as has been described by patients who have been subjected to these levels of sedation and for whom the process has been interrupted. The discontinuation of feeding and hydration is often mentioned to suggest that such patients die of hunger. This is incorrect. These patients are at their end-of life, under sedation, and one does not die of hunger within a few hours or days of interrupting feeding and hydration.

Nevertheless, the law states that “nourishment and hydration are treatments which may be discontinued”. The law does not say “must be discontinued“, which leaves some freedom of choice. The symbolic value of discontinuing hydration and/or nourishment can be disturbing for relatives and carers. It is also true that such needs during the end-of-life are diminished, and that continuing hydration and/or nourishment may result in unnecessary discomfort. It is possible to maintain a minimum level of hydration of around 250cc/24h.

4.     In the event of “Deep and continuous sedation maintained until death”, what actually causes death ?

Firstly, it is the disease which causes death, since the patient is “within a few hours or days” of his/her death.

This is within the realm of double effects: the relief of pain coupled with the possible acceleration of death, which is not in itself the desired effect. It can be accepted for patients who, in any case are dying and for whom there is no other means available to relieve their suffering. In such situations, which are inevitably complex, life is respected, but one has to accept the inevitability of death.

In euthanasia and its varying terminologies (medically assisted suicide, active assistance for death etc.), the objective and intention are to provoke the death of patients immediately, irrespective of whether or not they are at their end-of-life.