The Lancet Warns: Women Will Die if Abortion is Restricted. Can we believe it? 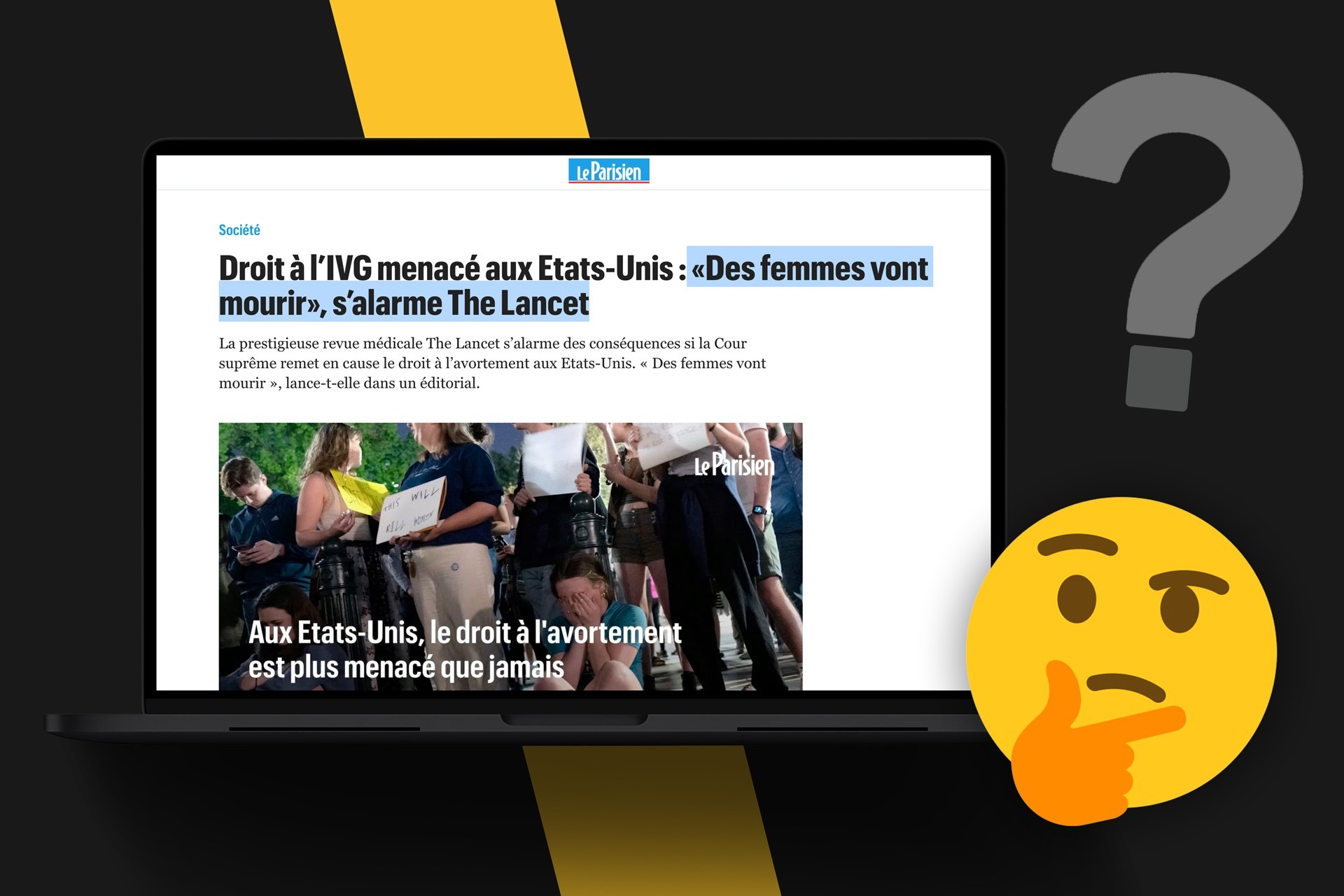 Just after the Politico website published the Supreme Court’s preliminary draft opinion on the right to abortion, the prestigious medical journal The Lancet published an angry editorial retort on May 14, 2022.  Entitled “Why Roe vs Wade must be defended“, it was also widely reported in the French press on the very day the Lancet article appeared.

It is stated, in particular, that: “If the Supreme Court confirms its draft decision” (transferring abortion jurisdiction back to the states),’” then women will die. (…), the Justices and their supporters will have women’s blood on their hands.”

To support this allegation, The Lancet refers to the WHO’s publication dated March 8, 2022, where unintentional pregnancies and the subsequent abortions were reported to be unsafe. The WHO recommended that abortion deadlines should be abolished. It was claimed that legal restrictions were not only ineffective at reducing the number of abortions, but that these restrictions correlated with an increased rate of unsafe abortions and maternal mortality.

On April 8, 2022, Alliance VITA analyzed  the dubious manner in which the data was calculated to make such claims, and found significant biases in the estimates and extrapolations. The WHO had originally based its’ assertions on a 2020 Lancet article which evaluated the periods from 1990-95 and 2015-19, and claimed that countries with liberal abortion policies saw abortion rates fall by 43%. Conversely, they reported a 12% abortion rate increase in countries with strict abortion laws. Oddly, China and India, which account for nearly 3 billion of the 7.9 billion of the earth’s inhabitants, and where abortion is legal, were curiously excluded from the calculations. If the data from these two countries are included, the decrease in abortion rates is only 8% in countries with liberal policies. Moreover, for the period 2015-19, the overall abortion rate for countries with liberal policies was shown to be 11% higher than in countries with strict laws. Therefore, when the comprehensive set of data is used, the WHO’s conclusions are refuted: there is no correlation between legalizing abortion and decreasing the number of abortions.

Moreover, according to the latest Lancet editorial, abortion is the end result for three-fifths of the 120 million unintentional pregnancies, with 45% labelled as being performed under unsafe conditions. “This leaves 33 million women undergoing unsafe abortions, their lives put at risk because laws restrict access to safe abortion services.”  Nonetheless, in November 2017, an article published by the same journal stated that: “no clear correlation was observed between the incidence of unsafe abortion and maternal mortality rates.”

The Lancet editorial also claims that “in the United States, the maternal mortality rate for Black women, who account for a large number of unsafe abortions, is almost 3 times higher than for non-Hispanic White women.”

According to national statistics by ethnicity, from 2018 – 2020, the maternal mortality rate for Black women was 2.5 – 2.9 times the rate for non-Hispanic White women. In May 2021, an in-depth analysis of the causes of maternal mortality was published in “Maternal Mortality in the United States” where abortion was not found to be a main factor. Indeed, even when abortion was broadly interpreted as any pregnancy with an abortive outcome (miscarriage, ectopic pregnancy, surgical or medically induced abortion… 1) the total number of mothers who died during childbirth in 2018 was 658, including 205 Black women. This meant that a 7.6% mortality rate was attributed to abortions, far behind hypertension, circulatory system abnormalities, embolisms and other causes. There was no evidence found that Black women had increased maternal mortality due to elective abortions. On the contrary, the authors emphasized that maternal mortality might be due social factors such as “income, social status, education, access to the health care, housing, physical environment, social services, and cultural differences.”

Apart from the current debate regarding the upcoming Supreme Court decision, it is paradoxical a scientific journal such as The Lancet, should put forward unjustifiable and unscientific conclusions. Their time would be better spent evaluating conditions of maternal mortality among Black women and how to improve overall health care and social policies for the Black community.